Google is sponsoring a conference this week that features white supremacists, anti-gay activists, and one group classified by the Southern Poverty Law Center as a “White Nationalist hate group.”

One panel at this week’s Conservative Political

Action Conference in Washington, DC is called “The Failure of Multiculturalism,” and it features the founder of a website that’s claimed:

So why is Google spending at least $20,000 to co-sponsor this event?

Aimee Castenell lives in Atlanta, Georgia, and she knows what it’s like to be the target of hate speech. Her parents grew up in the Jim Crow-era South, and they were terrorized by fear, hate, and racism in every part of their lives. Aimee’s also a big fan of Google, and she couldn’t believe that Google would sponsor an event that tolerates white supremacy and hate speech.

Aimee started a petition on Change.org calling on Google to denounce the white supremacist hate speech featured at CPAC, and for the company to donate $20,000 – the sum it donated to CPAC – to causes that advance tolerance and equality.

When asked why it was sponsoring an event like this, Google replied that it wanted to reach “young people who are savvy about technology,” according to Bloomberg News. But some of those young people attending CPAC have also advanced white supremacist ideas. One group, called “Youth for Western Civilization,” has even claimed that white people were the victims of apartheid in South Africa.

Aimee wants Google to quickly distance itself from the white supremacists that are attending CPAC. The last thing a major company like Google wants is to be associated with this kind of hate speech — if enough people sign Aimee’s petition, the company will feel the pressure and take action to correct its error in sponsoring this conference.

Thanks for being a change-maker,

– Jess and the Change.org team

This is incredible: We’ve reached 140,023 signatures on our petition calling out Eric Cantor for caving to special interests and softening the STOCK Act, a bill intended to ban insider trading and crack down on corruption.

Hours after a watered down STOCK Act passed the House, news broke that

powerful Republican Spencer Bachus, chairman of the House Financial Services Committee will face an ethics investigation over possible insider trading allegations. Bachus is being investigated about whether he received secret briefings on the imminent collapse of the economy in 2008 and then made trades to profit off the economic crisis.

If you haven’t signed our petition it’s not too late. House and Senate negotiators will be meeting to hammer out a final STOCK Act bill. Make your voice heard and send an unmistakable message to Eric Cantor and Speaker Boehner to demand the toughest ethics reforms and that that people’s interests come before the special interests.

Yesterday, we all learned that Wall Street banks will pay $25 billion for their illegal activity — with the money going mostly to housing victims. New York Attorney General Eric Schneiderman told Rachel Maddow that this is just a “down payment” and vowed to keep fighting.

As co-chair of the new federal investigation of Wall Street, he promised that “the big payday is still to come” and “every possible criminal case is still on the table.”

Click here to watch Schneiderman on MSNBC last night — and write him a note with your thoughts on this announcement, which we’ll personally deliver. 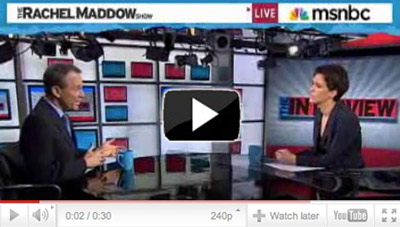 Eric Schneiderman was the lone public voice against a broad immunity deal for Wall Street until the grassroots rallied against it.

Last night, he thanked the grassroots.

You and over 160,000 other Progressive Change Campaign Committee members signed petitions, called Congress, called state Attorneys General, and attended local events. Other grassroots groups fought by our side.

This activism ultimately led to yesterday’s news — and forced the president to open a new Wall Street investigation and appoint Schneiderman to lead it.

Eric Schneiderman said last night, “What we’ve seen is a swing toward progressive populism in this country.” We hope other public leaders got the memo.

Click here to send Eric Schneiderman your thoughts on yesterday’s announcement, and we’ll deliver it to him.

Thanks for being a bold progressive. WE NOW WAIT FOR THE GOVERNOR’S PROMISED SIGNATURE