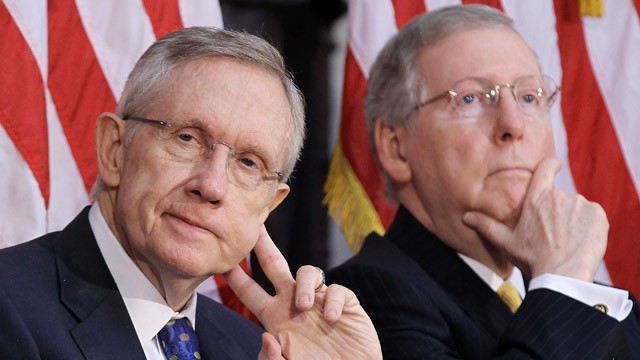 Washington, D.C. – Nevada Senator Harry Reid spoke on the Senate floor today about Republican obstructionism in the Senate. Below are his remarks as prepared for delivery:

Over the last week, I’ve listened to my Republican colleagues come to the Senate floor to lament how little the Senate has accomplished during the 112th Congress.

In fact, it’s a wonder we’ve gotten anything done at all, considering the lack of cooperation Democrats have gotten from our Republican colleagues.

I’ve said it before, but this bears repeating. In my time as Majority Leader, I have faced 382 Republican filibusters.

Time and again, my Republican colleagues have stalled or blocked perfectly good pieces of legislation to score points with the Tea Party – and they’ve hurt middle-class Americans in the process.

Even the most noncontroversial, consensus matters – items that would have passed by unanimous consent in the past – Republicans have obstructed or delayed.

END_OF_DOCUMENT_TOKEN_TO_BE_REPLACED

Two leading advocates of overhauling the Senate’s filibuster rules put the decision about the size and scope of the package squarely in Senate Majority Leader Harry Reid’s court Thursday afternoon.

But whatever changes to Senate rules the Nevada Democrat decides to pursue, Democratic Sens. Jeff Merkley of Oregon and Tom Udall of New Mexico told reporters they expect any package would garner the votes need to move on the floor, either using the constitutional or nuclear option of changing the rules with a simple majority or a bipartisan deal with a higher threshold.

“Most serious reforms of the rules occur because a leader has 51 votes behind them, and that’s where Harry is now,” Merkley told reporters. “That is what enables him to negotiate. On the other hand, if the negotiations succeed … that’s great. It would be wonderful to have a bipartisan agreement.”

“I think he has a real instinct as to what will make this place work better, and so I’m of the opinion that when he gets to that final point,” the caucus will back him up with at least 51 votes, Udall said.

END_OF_DOCUMENT_TOKEN_TO_BE_REPLACED

Williamsburg, Virginia (CNN) – While at a GOP retreat, House Republican leaders on Friday announced a vote next week on a three-month extension of the debt limit, with a requirement that both chambers pass a budget or else go without pay.

The added condition to the short term extension bill aims to force the Democratic-led Senate to pass a budget–something the upper chamber hasn’t done in four years.  FULL  ARTICLE

END_OF_DOCUMENT_TOKEN_TO_BE_REPLACED

The Obamas first swung by the Commander in Chief’s Ball, where they danced in front of a sea of cell phone cameras to Jennifer Hudson‘s performance of Al Green‘s classic “Let’s Stay Together.” They then switched partners: the first lady danced with Marine Corps Gunnery Sgt. Timothy D. Easterling and the president danced with an Air Force Staff Sgt. Bria D. Nelson.

Obama sang a bit of the same song at a campaign fundraiser in Harlem last year.

The first lady wore a custom, ruby-colored gown designed by Jason Wu, who also designed her inaugural gown in 2009, and the president wore a tuxedo and white tie.