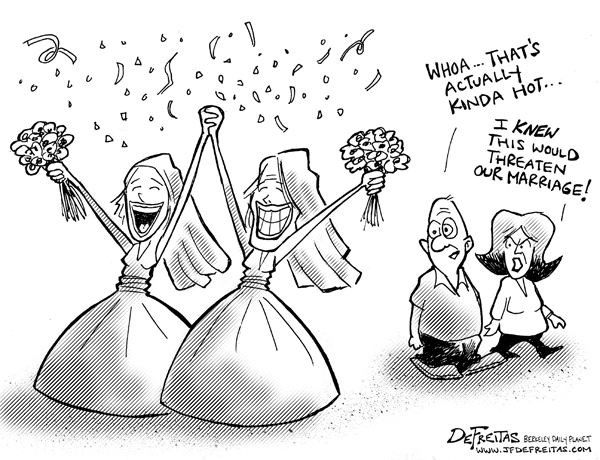 END_OF_DOCUMENT_TOKEN_TO_BE_REPLACED

The Supreme Court has the opportunity to issue a landmark ruling this year as it considers the constitutionality of Proposition 8, California’s ban on same-sex marriage.

It could define same-sex marriage as a constitutionally-protected right, or it could uphold the ban, setting back the gay rights movement for years. The case, however, isn’t as simple as deciding whether or not same-sex couples have a right to get married.

After the Supreme Court today hears the oral arguments in the caseHollingsworth v. Perry, it has five options to choose from. Below is a rundown of the court’s choices — whether to protect the right to same-sex marriage in 50 states, zero states, nine states or one state. There’s one last option — to punt on the decision and dismiss the case.

In the most dramatic ruling it could deliver, the Supreme Court could useHollingsworth v. Perry to rule that marriage is a constitutional right available to all Americans, gay or straight.

“The Prop. 8 case has the potential to be the Brown v. Board of Education for gay rights,” UCLA School of Law Prof. Adam Winkler told CBSNews.com.

“The question is whether the court’s ready to do that,” said Walter Dellinger, a partner at O’Melveny & Myers who served as U.S. Solicitor General during the Clinton administration.

END_OF_DOCUMENT_TOKEN_TO_BE_REPLACED

The legality of same-sex marriage varies by state. When it comes to who should decide this issue, most Americans- 62 percent – think the decision should be left up to each individual state government, while just 26 percent think it should be up to the federal government.

Meanwhile, a slight majority of Americans (53 percent) thinks it should be legal for same-sex couples to marry.