Imbalances in the microbial community in your intestines may lead to metabolic syndrome, obesity, and diabetes. What does science say about how to reset our bodies?

A few years before Super Size Me hit theaters in 2004, Dr. Paresh Dandona, a diabetes specialist in Buffalo, New York, set out to measure the body’s response to McDonald’s—specifically breakfast. Over several mornings, he fed nine normal-weight volunteers an egg sandwich with cheese and ham, a sausage muffin sandwich, and two hash brown patties.

Dandona is a professor at the State University of New York-Buffalo who also heads the Diabetes-Endocrinology Center of Western New York, and what he observed has informed his research ever since. Levels of a C-reactive protein, an indicator of systemic inflammation, shot up “within literally minutes.” “I was shocked,” he recalls, that “a simple McDonald’s meal that seems harmless enough”—the sort of high-fat, high-carbohydrate meal that 1 in 4 Americans eats regularly—would have such a dramatic effect. And it lasted for hours.

Inflammation comes in many forms. The swelling of a sprained ankle indicates repairing torn muscle and tendon. The redness and pain around an infected cut signifies the body’s repulsion of microbes. The fever, aches, and pains that accompany the flu represent a body-wide seek-and-destroy mission directed against an invading virus. They’re all essential to survival, the body’s response to a perceived threat or injury. But inflammation can also cause collateral damage, especially when the response is overwhelming—like in septic shock—or when it goes on too long.

END_OF_DOCUMENT_TOKEN_TO_BE_REPLACED

[WILL PRESIDENT OBAMA GET THE CREDIT?] 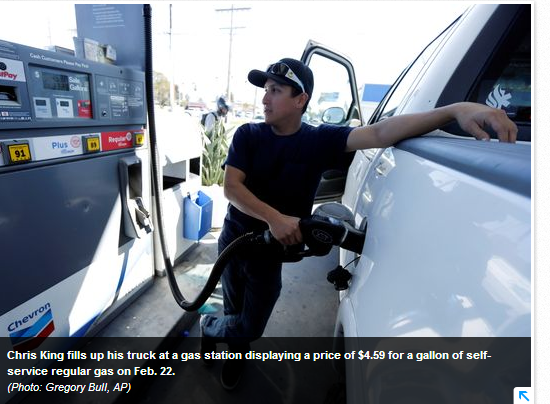 When it comes to gasoline prices, what goes up usually goes up – particularly in heavier spring and summer driving seasons.

After a sharp early year run-up that was expected to continue propelling prices up to $4 or more a gallon by late spring, pump prices have reversed course and continue to slide. Nationally, a gallon of gas now averages $3.51, down 18 cents over the past four weeks and 37 cents lower than year-ago prices.

With crude oil prices slumping, prices are expected to fall another 20 cents a gallon by Memorial Day. Meanwhile, April consumption is the lowest since 1997.

“To see this much weakness in demand for this time of the year is pretty eye-opening,” says Patrick DeHaan, senior energy analyst at price-tracker gasbuddy.com. “You can attribute some of the decline to more fuel-efficient vehicles, changes in lifestyle, high (crude oil) inventories or an economic slowdown.”  FULL ARTICLE