“Donald Trump and Republican leaders in Congress have made clear they are serious about repealing Obamacare, and doing so quickly. But don’t assume their dismantling of government health insurance programs will stop there.

For about two decades now, Republicans have been talking about radically changing the government’s two largest health insurance programs, Medicaid and Medicare.”  MORE

Author of ‘Obama’s America: A Transformative Vision of Our National Identity’

WHY WE PROPOSE TO DO THIS:
This bold plan will restore equality of opportunity in our country. It enshrines the central value of the American Dream, that every American child should have an equal chance at achieving the good life: a job that allows him or her to support a family, and eventually enjoy a safe, secure retirement.

Our plan is fiscally responsible. First of all, increasing the minimum wage will directly save our government money by leaving fewer working people in need of government support. Today, millions of people who work full-time still need Medicaid, food stamps, and other aid because the minimum wage is too low to bring them out of poverty. McDonald’s is even telling its employees to seek out government assistance.

END_OF_DOCUMENT_TOKEN_TO_BE_REPLACED

During an appearance at The Heritage Foundation in Washington, D.C, a key center of power for the conservative movement, North Carolina Gov. Pat McCrory portrayed himself as a business-minded policy wonk, earnestly extolling the benefits of infrastructure development and government-efficiency measures. He might as well have been describing someone else.

For the last year, McCrory has engineered a hard-right shift in North Carolina that has crippled millions in his state. His 2012 election gave Republicans control of all three branches of the state’s government for the first time since Reconstruction and they took advantage of it. In 2013 alone, North Carolina has said no to expanding Medicaid under Obamacare, approved a tax plan that redistributes wealth from poor to rich, cut education by half a billion dollars, instituted perhaps the toughest voting restrictions in the country, weakened campaign-finance laws, and passed its own version of Texas’ controversial abortion measure. 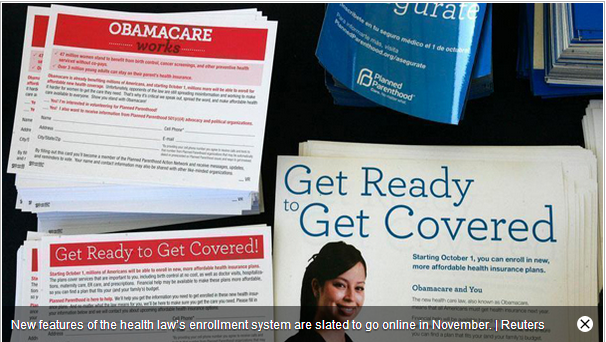 November’s shaping up to be a major test of Obamacare functionality.

That’s when new features of the health law’s enrollment system — some of which have been put off repeatedly because of insufficient testing — are slated to go online. Among them: online enrollment in the marketplace for small businesses, a Spanish-language enrollment website and the transfer of Medicaid applications from the feds to the states.

Administration officials are insisting that the already-stressed system will run smoothly for most potential enrollees by the end of next month, but they’re shedding little light on what’s left on the so-called punch list that the administration’s tech experts are plowing through.

Marilyn Tavenner, who runs the federal agency that oversees the enrollment process, told lawmakers Tuesday that some of HealthCare.gov’s functions were postponed because of a “compressed time frame” for testing.

END_OF_DOCUMENT_TOKEN_TO_BE_REPLACED

[A sitting governor subs for Bill O’Reilly on Fox?]

Every time you go to a fast-food restaurant, you have a 1 in 5 chance of being served by a worker who’s living in poverty.

A substantial number of workers who serve up your fast food aren’t making enough to get by, and are instead living in poverty or relying on government programs such as food stamps, a new report finds.

On average, 20 percent of front-line fast-food workers were living in households with incomes below the poverty line over the years that the researchers studied. That compares to just 5 percent of workers as a whole, according to the report released Tuesday by the UC Berkeley Center for Labor Research and Education and the University of Illinois’s Department of Urban and Regional Planning,

The report also found that, on average, 24 percent of households that included a nonmanagerial fast-food worker were relying on food stamps — now known as SNAP — during the years they studied.

END_OF_DOCUMENT_TOKEN_TO_BE_REPLACED

Politico reported Tuesday evening that Texas Gov. Rick Perry’s (R) administration is in negotiations with the Obama White House to accept about $100 million in federal money to implement an Obamacare Medicaid program to help elderly and disabled Americans.

Perry has been a heated opponent of the health law. He refused to accept $100 billion in federal funding to expand Texas’ Medicaid program under Obamacare, which could have helped 1.5 million poor Texans afford basic health benefits. As recently as April, Perry essentially called the expansion a joke. “Seems to me April Fool’s Day is the perfect day to discuss something as foolish as Medicaid expansion, and to remind everyone that Texas will not be held hostage by the Obama administration’s attempt to force us into the fool’s errand of adding more than a million Texans to a broken system,” said Perry.