It’s an amazing thing how many politicians forget—or choose to forget—that most voters are women.

I know that sounds a bit bizarre to the reactionaries of the country—people who live in the 1950s—where contraception is still a hot issue, where women are always at home with the kids and Papa Bear is downtown at work, Leave it to Beaver is cool, and Father Knows Best means just that.

“Bring on the binders,” we can hear Mitt buzzing from the inner office. “Binders filled with women!”

Whole binders of them! Women we’ve never met. Strange people from this other planet that Mitt Romney apparently never visited.

END_OF_DOCUMENT_TOKEN_TO_BE_REPLACED 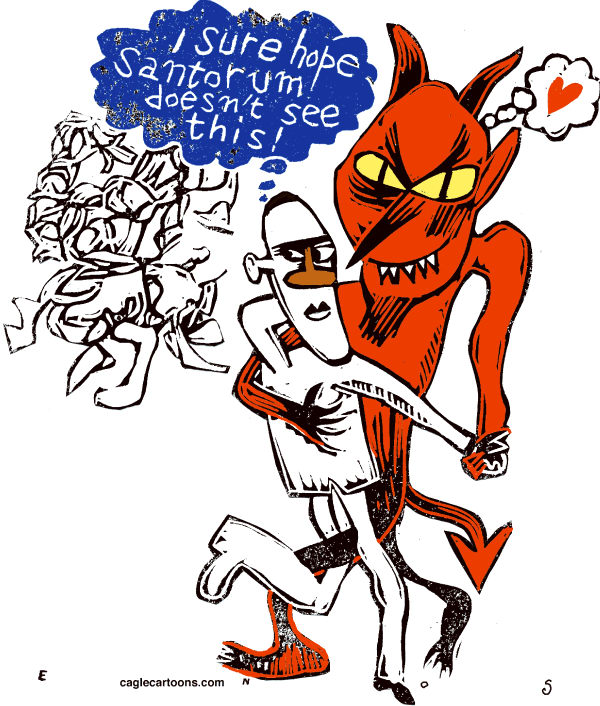 Are you tired of the sound of sonic booms?  You do know what they are, don’t you? It’s the sound of Mitt Romney FLIP FLOPPING, changing what little mind he may have, on this issue and that issue.  Sunday, he was pro-Obamacare.  Monday he denounced it.  Yesterday, Mitt revamped his campaign and, guess what:  He for Obamacare…again!   Is he also pro-gay, pro-releasing tax returns, anti-Mitch McConnell or pro raising taxes on the rich?  Bring me the head of the real Mitt Romney! Once we joked about Mitt Romney’s willingness to say anything to get elected:  It just depends on the news weather vane. We asked why a man, who has no core, would think he could be elected president? What have his advisers been telling him these last seven years?  Should we blame them for MITT ROMNEY DANCING WITH THE DEVIL?  —G.O.W.

END_OF_DOCUMENT_TOKEN_TO_BE_REPLACED

I was shocked when I saw the video of Anne Romney calling us, “You people…” This morning I awoke to the scandal in which her husband, who she champions as a repository of virtue, referred to us as “Those people…”  That’s just it.  These elite society patrons have revealed that they look down on the poor, the unsuccessful, blacks, Hispanics,illegal aliens…the list goes on.  Why do they want to head our government?  Don’t they have enough to do remodeling newly renovated home in La Jolla with sports an elevator for the automobile collection?  They look down on us saying we pay no taxes and at the same time refuse to produce historical evidence that they do.  They may be rich, give beauçoup bucks to charity and go to church with their beautiful family in tow, but, Mitt and Anne Romney do not measure up to the standards Americans have subscribed to for our president and first lady.  On November 6, 2012, there is only one choice: Barack Obama for Re-Election!

END_OF_DOCUMENT_TOKEN_TO_BE_REPLACED

Ann Romney knows how to give a speech.  She really loves her husband and has a great marriage.  However, she carries herself as an aristocrat augmented by her request, “Trust me” about Mitt’s credentials.  Don’t be concerned about the details.  One would not by a used car from smooth talker like Ann.  Well, not before having our mechanic check under the hood.  And, what about that gratuitous exclamation, “I love women.” [For obvious reasons she had to explain quickly what she meant.]  She was hoping to reach the women voters who are angry about the GOP “War on Women.”  Now, Mitt Romney is the standard-bearer for the roll back of civil rights for women.  While Mitt loves Ann, he does not love women in general and seeks to control them…like he controlled Seamus when he decided to put him in a kindle, tied it to the roof of his car for a 12 trip.  The pet(?) got so sick it lost control of its bowels. How can Mitt love one woman so much and not love women in general?  BTW, Ann, no one is attacking Mitt for his success.  We just abhor presidential candidates who trade in secrets…like the ones you two are hiding in your tax returns.  Also, the excuses you use for this are lame. I must admit that I watched the convention last night in a casual fashion.  However, it looked lily-white to me.  Well, the exceptions were Condoleezza Rice and the female governor of South Carolina.  America is growing more diverse with each passing day. But, not the Republican Party. They need more than Bobby Jindal! They used to be an important part of the fabric of our politics. But Republicans have been diminished by their gradual adoption of political mores and tactics like, lying to voters, Nazi-style and soviet-style propaganda techniques, etc., playing dirty to win!  Despite their efforts our political face and population is growing more and more brown, black and yellow.

END_OF_DOCUMENT_TOKEN_TO_BE_REPLACED

ALL OF NORTH AMERICA?  WHAT ARROGANCE!  WHO SAYS CANADA WILL DO MITT ROMNEY’S BIDDING?  WHO SAYS THE STATES WOULD FOLLOW MITT ROMNEY? Mitt Romney criticizes the President for his regulations but announced a series new regulations to unfetter the Big Oil companies:

MITT ROMNEY WOULD BE DICTATOR OF THE ENTIRE CONTINENT OF NORTH AMERICA!

DON’T HELP ROMNEY MAKE THE BIG OIL COMPANIES EVEN RICHER AT THE EXPENSE OF OUR ENVIRONMENT THAT GOD GAVE US!