END_OF_DOCUMENT_TOKEN_TO_BE_REPLACED

[That should read “Holder.”]

END_OF_DOCUMENT_TOKEN_TO_BE_REPLACED 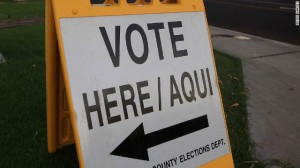 (CNN) – The voting population of Latinos has exploded to the point where Latinos will not only be a decisive force in the presidential election, but will likely affect the outcome of political contests from school boards and statehouses to Congress, according a new report by the National Association of Latino Elected and Appointed Officials.

“Latino voter enthusiasm is up,” said Arturo Vargas, executive director of NALEO. A recent poll by ImpreMedia-Latino Decisions confirms that analysis, counting three quarters of Latino voters as actively engaged in the election with 14% of all Latinos saying they are actively working on getting out the vote.

– Check out the CNN Electoral Map and Calculator and game out your own strategy for November.

The number of registered Latinos has increased by 26% in the last four years to 12.2 million or 8.7% of all voters. A new potential Latino voter turns 18 every 30 seconds. Already, one of four U.S. citizens under the age of 18 is Latino, including 48% of the youth population of Texas, Vargas said, but low voter registration among young people and new voter ID laws could dampen turnout.